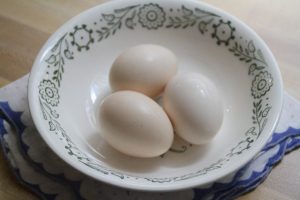 Josh Tetrick decided to start the beginning of food revolution. His invention is mayonnaise “Just Mayo”, he starts the fight in industry where methods of making production are very expensive and irrational.

Vegetable version of this sauce, which means without eggs, is only one of the products which Josh Tetrick did. The company of Josh Tetrick is called Hampton Creek Foods. And ambitious goal of this person is to replace eggs with his product.

Right now Hampton Creek has got about 30 million dollars for development from several well-known investors. They are Bill Gates, Jerry Yang (Yahoo) and Peter Till (PayPal), and the richest person of Asia Lee Kha-Sheen.

The idea of plant origin egg, which is called Beyond Eggs was born by the wish to make more healthier and affordable food.

He was in Africa for a long time, and saw all horrible of starvation. And he realized that for ages in the food industry were no innovations.

And Tetrick decided to do something about food innovations.

As Tetrick thinks he could make a revolution in food industry, only by replacing regular eggs by plant analogue.

Because to grow plant is much cheaper then make a chicken farm for producing eggs.

So if there is possibility to replace eggs by plant equivalent can reduce dependence of humanity to expansive eggs, and lots of products can be much cheaper.

You can already buy “Just Mayo” right now in Whole Foods and Costco or Safeway. And it is reality already.

If you have enough money for developing such idea, I will pretty sure you will have enough investors, and probably you will save our world from starvation.

Electricity From The Soil.

Medical Innovations In Software And Gadgets As Business Idea

Pasta Production As A Business