large investment > Tea In Capsules And Tpresso Machine For Its Preparation

Tea In Capsules And Tpresso Machine For Its Preparation 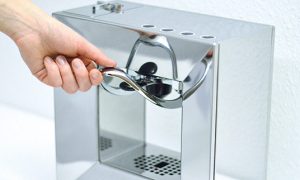 In 80’s last century young inventor Eric Favr, who was working in Nestle co, invented and brought to life idea about capsules of coffee.

After several years his system has got the big popularity in the entire world – lots of people liked such coffee.

After such success Eric Favr decided to continue his developments. And this time he invented the new way of preparing tea.

Eric noticed that there is a big market in Asia, where main drink is not coffee but tea.

This project Eric decided to name Tpresso, sounds like Expresso but with a T letter instead of Ex.

The idea of Tpresso is a kind of tea ceremony but introduces in super modern way. The main thing about Tpresso is about combination of the best Chinese tea and the newest ways of its preparation.

The main advance is, that there is no need for customer to go to China to taste really good tea. Because it is so easy to insert capsule, with a good tea inside the Tpresso machine.

On the web page of developer customer can order something from 8 different elite teas. So everything can find something special for its taste.

Nowadays this tea machine is available on the market of China, where it is really popular. Such customers as Chinese, are very strict, and success on Chinese market is great.

The taste of tea is really good because of patent technologies.

Vending Machines For The Sale Of Salads