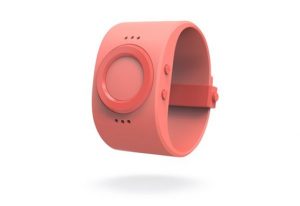 Tintell is a cell phone which looks like a bracelet, which is made for small children, who cannot use a regular cell phone. This project was shown at Kickstarter and has got enough money very fast.

Parents worry about their children, that is why grownups want their kids to be under supervision. But always look after them and not to give them enough freedom is not a way out either.

So Tintell is a Swiss cell phone in a form of a bracelet for small kids.

Developers say, that right now it is a smallest cell phone in the world, which looks like a wrist watch but without display.

In spite it, this gadget is equipped with microphone, dynamic, and slot for SIM-card, and small microprocessor which helps gadget to work its best.

First of all parents have to connect to this gadget with a use of Bluetooth from their smartphones to write down all necessary phone numbers and to make all required changes, to control this cell phone in future.

To make a call kid just needs to push the button and to say the name of the person he wants to call.

This phone also allows incoming calls but only from numbers in the memory of the device.

This gadget allows parents to trace via GPS where their kid is right now.

As you understand this market is opened and it you have enough money, you can make your own cell phone for small children.

Promotional Bracelet For Tracking A Child On The Beach