Battles Of A Radio-Controlled Tanks As A Business Idea 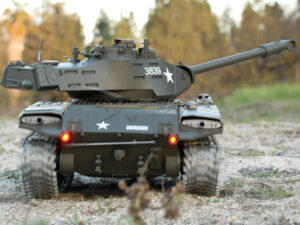 An interesting idea to start your own business is to organize tank battles, naturally radio-controlled tank battles. You can start this business with minimal investment.

An ordinary entrepreneur can use modern radio-controlled technology to build it’s own business.

One of the options for a successful business idea in this area is to conduct battles of radio-controlled tanks.

The advantage of radio-controlled tanks battles is the low threshold for entering the business.

In fact, a businessman can start even with an investment of 3 thousands dollars.

In addition, the target audience of such an attraction will not be limited by age limits.

Tank battles is an interesting entertainment for both children and teenagers and even adult men.

To organize battles of radio-controlled tanks, an entrepreneur will need to find a place with medium, and preferably high, traffic.

This may be the building of a large shopping center, station, etc.

The rent in such places is high, but later the businessman will not have problems with traffic and attracting customers.

In the summer time, such entertainment services can be provided on the territory of children’s attractions by signing a lease agreement with their owners.

To make battles, a businessman will need to purchase reduced models of famous tanks. A tank track and themed decorations.

First thing to remember is to minimize costs. It is advisable to purchase such products on the Internet.

Modern models of radio-controlled tanks cost from 3 to 15 thousand.

Moreover it is desirable for an entrepreneur to give preference to products of the middle price segment.

Their functionality must necessarily include sound and infrared guns.

Decorations (soldiers, trees, guns and other military paraphernalia) can be made independently, but it will take a lot of time.

If you have financial opportunities, they can be purchased at a specialized store.

To increase the profitability of such an entertainment business, it makes sense to hold fights for corporate clients.

This will allow you to get the maximum profit in the minimum time. There can be a lot of options for using the attraction.

If desired, a businessman can conduct tank battles at children’s parties.

You can arrange city tournaments in tank battles among schoolchildren.

How much can you earn on the battles of radio-controlled tanks?
The cost of participation in such events can be set in the amount of 20 or 35 dollars.

You can earn up to 6 thousands dollars a month from making battles of radio-controlled tanks.

Business idea of production and sale busy boards for children

Ride Down The Rope Business Idea